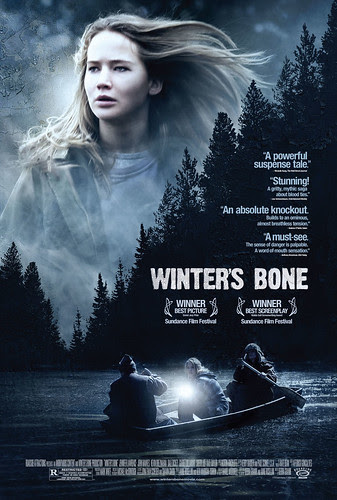 Missouri Noir. Ozark Gothic. Are those things? They are now. I do like a good genre mashup, and one of my favorite types of stories is the noir detective story, which beneath all its layers of Ozarkian grime and poverty, this totally is. Plus it's got two Deadwood alumni, the fantastic John Hawkes and the creepy-chameleon Garrett Dillahunt. Plus it's got Laura Palmer, and Sheryl Lee still looks good, even in a sad messed-up warts-and-all role like this. Acting credit really has to go to Jennifer Lawrence the lead, though, who carries such a tough and uncommon role for an American film: the believably strong girl, the survivor. She walks the moral line just like a good detective must, skirting between the law and the lawless, remaining tenacious, tight-lipped and smart-mouthed.

One thing that struck me is how the narrative kind of got away from our protagonist at the end, how the further into the story we go the more we realize that not only are events unfolding over her head, but they're unfolding ahead of her and she's playing catch-up. By the climactic end, no punches are pulled for emotional involvement or intensity, but the events aren't caused by choices Ree makes; instead it's a series of events happening to her, or information brought to her. The thing is, none of this hurts the drama of the film or the primary brunt of this story. After all, this isn't a story of Ree reuniting with her father or coming to terms with his life and death; this isn't a tale of her revenge on those he got mixed up with. This is a smaller story: Ree staying afloat barely, keeping her family together, not succumbing to the shit she's swimming through. And it's goddamn tragic-beautiful from its first frame to its last.

Seen at the Regal Fox Tower.
By travis ezell at 7:56 PM

The idea is that if I keep a record of every single film I watch, my joy of dumping more useless opinions onto the internet will encourage me to watch more movies, and everybody will win. The results are mixed.
Originally I promised myself I'd keep it short (hence the title), but who are we kidding? The end result is an unedited rambling first-impression stream of consciousness. More often than not this blog is the place where I "think out loud" about whatever film I've just seen.
This is not intended as any kind of intelligent critical discourse beyond that -- just initial thoughts. You won't find masterful essays here and these entries are definitely NOT to be mistaken for "movie reviews."